So today, I’m going to focus on the issue in a more individual way. I was struck by how victimized Katie Hill felt and how that caused her to retreat back into her home and quit her job. As far as I can tell, her political party abandoned her. She felt threatened and like she was out of options. With no support, she probably was.

I blame Nancy Pelosi and the other Democratic leaders for being fair weather friends to their rising star. Though Rep. Hill had been Speaker Pelosi’s protege, when she needed the Democratic leadership most, they gave in to the misogyny and homophobia of our culture. Instead of helping an intelligent, talented young woman work through a private situation made hideously public, they further victimized her.

Rep. Katie Hill
@RepKatieHill
It is with a broken heart that today I announce my resignation from Congress. This is the hardest thing I have ever had to do, but I believe it is the best thing for my constituents, my community, and our country. See my official statement below. 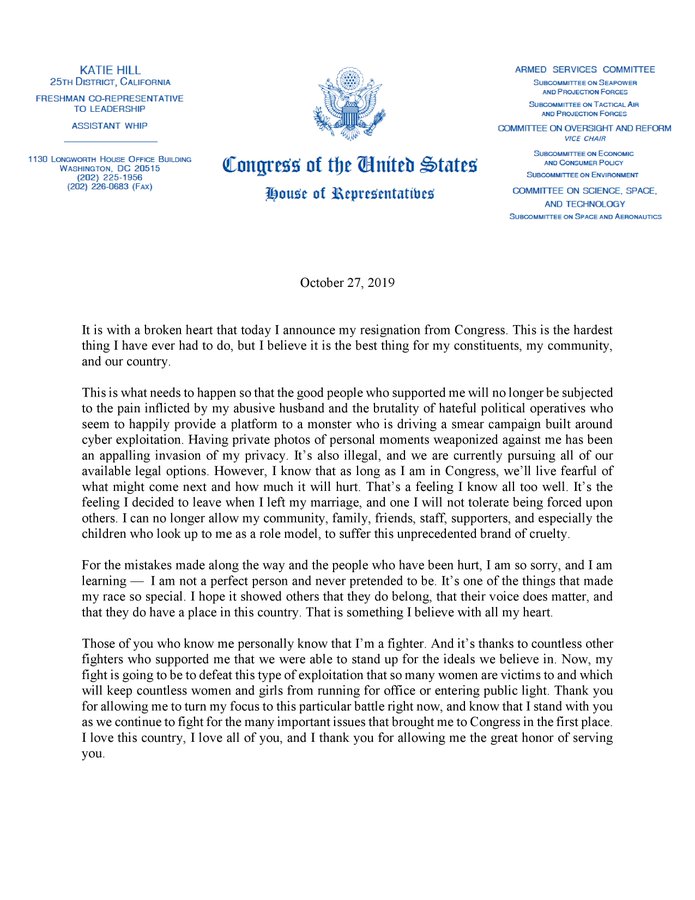 Despite what you may have heard, what I’ve found in my research shows a long term polyamorous relationship between three people that was within Rep. Hill’s marriage and sanctioned by her husband. Katie Hill’s husband had no problem with the arrangement between the three of them and neither did the other woman involved, until Rep. Hill decided to break off both relationships so that she could devote herself fully to her work in Congress.

The woman involved was saddened, but accepted the break up maturely. Rep. Hill’s soon to be ex-husband, on the other hand, showing himself to be the typical entitled type, was being financially supported by his wife and took the loss of his meal ticket badly. He shopped his story and photos around to right wing sources until he found an unscrupulous taker who was willing to help him ruin his wife’s reputation. On top of all this, the nude photos which were published were taken by her husband without Rep. Hill’s knowledge or consent and all of the photos were sold without her consent, which is illegal.

Rep. Hill is the victim in this situation. She should have been protected.

The Republican party would not have abandoned a man in Rep. Hill’s situation. A Republican man would have retreated into privacy for a period of time- days or maybe a few weeks, but he wouldn’t have resigned. The offending spouse who threatened the politician’s career would have been made to realize the error of his ways and forced to back off.

Then the politician would have resumed public appearances and made a public apology for his mistakes while surrounded by his family and political supporters, and gone on with his life. He would not have resigned or even responded in depth to questions about the possibility. This is a strategy they’ve used many times, including for inappropriate affairs, which is, in the end, all that Katie Hill did that could be considered wrong.

The Republicans have kept key players in place using this strategy. The Democrats, on the other hand, through their lack of support and loyalty to their people, lose key players like Al Franken and Katie Hill regularly. Democrats allow them to be driven out of office over relatively minor personal mistakes or long past offenses.

I don’t agree completely with what Barack Obama said this week about calling people out, since the internet is a tool I’m sitting here using myself right now, but the “purity” issue is one liberals and progressives need to face. People are complex, and make mistakes. Pointing out areas that can be improved and calling out injustices is valuable. Expecting perfection or purity at all times is unrealistic and damaging. No human can live up to it. Especially not a human who works in a high pressure situation and needs to blow off some steam every once in a while. Mistakes will be made.

I’m not making an excuse like “Boys will be boys.” I’m saying we need to allow people their humanity and flaws.

But I’m also saying that sexuality isn’t a flaw. Katie Hill was in a long term consensual adult relationship that didn’t break any rules or laws. There are concerns about the dynamics involved, but none of the people involved in the relationship seem to have had issues until the breakups occurred. At some point, we need to accept that people are adults and let them make their own decisions.

Since Nancy Pelosi, as usual, proved inadequate as a mama bear protecting her cubs, I’m going to post a list with some of the rules I taught my daughter. Maybe they’ll help someone else avoid falling into a trap. The world needs more feminist mama bears to help support our collective daughters.

Be nice and be quiet will not appear in any rules for girls made by me, unless it’s a list of deadly sins.

1- Women apologize too much. Own your actions and your power. You don’t automatically owe anyone anything and they can’t take it unless you let them. Hold your head up high and don’t let them f*ck with you.

2- Live with no regrets or guilt. Make the best decision you can, based on the best information available, then be at peace with your choice and move on. That last part is important- move on. You don’t need to wallow in mistakes or bad outcomes. Things happen. Move on. Survive.

3- Be honest and open in relationships instead of playing mind games. It’s true that open communication is the most important part of the relationship. The second most important thing is shared goals. You need to be on the same page about what your relationship is and where it’s going. Being swept off your feet may seem romantic, but it won’t be when you discover you’re married to someone who’s the complete opposite of who you thought they were and who wants totally different things.

4- Trust your gut instincts about people. You are smart. Take a good look at the people around you and consider their capabilities for betrayal and loyalty, whether it’s a man at a bar or someone you’re considering a relationship with. It does you no good to be too trusting of people. We’re taught to ignore our instincts about danger and dangerous people. Stop doing that. You don’t always have to act on them overtly, but start listening to them. If you think someone is a creep, they probably are, even if you can’t point to a specific reason why you think so. Keep your distance, no matter what other people say.

5- In the digital age, there is no privacy. If there’s a device in the room, assume the mic and the camera could be on. This includes devices we don’t normally consider, such as televisions. Think about what you do and how it will affect the future. Think about what you do. Whatever you put in digital form has the potential to go public. Don’t assume it won’t.

6- Love yourself and your body. I’m going to go into more depth on this one, because I feel very strongly that the only way we’ll ever end sex shaming or overcome misogyny at all is if we refuse to allow ourselves to be shamed or humiliated over our bodies and what we do with them.

We need to take our bodily autonomy back by reclaiming the right to determine what our bodies look like and what we do with them, in every arena, from sex to shaving our legs to the amount of physical space we take up to sports and medicine.

As long as we give control and decision making over to men and a society that’s ultimately run from a misogynist point of view, we’ll never be free. They’ll always be able to tweak our internalized misogyny and make us fall in line.

I am a 58 year old overweight woman. I understand how difficult it is to actually do what I am asking for, but we won’t come into our full power as women until we fully own our own bodies. And we won’t fully own our own bodies as long as we let other people dictate what is and isn’t okay about them. We have to become okay with ourselves first, no matter what we look or feel like, no matter who we have or haven’t slept with, no matter how we express ourselves physically.

In some ways, they’re just bodies and we all have them. In other ways, they’re all beautiful, because they express our unique histories, both genetically and personally. If you still live in a body, your body is a success, because it’s kept you alive. Thank your body, and try to accept its quirks, just like it accepts your bad habits.

Bodily autonomy is one of the most important freedoms, even though no one ever talks about it that way. The first step is accepting your body. The second step is not letting anyone else make you feel bad about it, or how you choose to use it. It’s yours. Own it. Stand up for it. Stand up for what you do with it.

This is what men do. They do it with every word and action and they defend each other’s rights to their own bodily autonomy.

The Republican party defends Donald Trump’s right to use his body for rape or murder. Surely a congresswoman has the rights to express her sexuality and to make decisions for herself. She also has the right to be free from shame and harassment. All women do.

If you think Rep. Hill was right to resign because she’s too immoral to be in office, I’d like to direct you to the Netflix documentary series The Family or the book The Family: The Secret Fundamentalism at the Heart of American Power by Jeff Sharlet on which the documentary is based. The members of this real life, right-wing Christian conservative, cult-like organization, which organizes the National Prayer Breakfast every year, but otherwise remains shadowy, include much of the Republican party and some Democrats. They subscribe to the King David Defense, in which they claim that, like the biblical king, they are chosen ones and needed. So when they are caught doing wrong, such as having an affair, embezzling or other criminal activities, they repent their sins and apologize, but they never, ever resign from office. No matter what. Until they are forced out.

Which, I guarantee you, is what we are about to watch play out in the White House with Pence and Trump.

Women and Democrats can learn from the confidence, tenacity and loyalty in this example.

LA Times- GOP enemies wanted to beat Katie Hill. Then they got her nude photos

CNN- READ: Rep. Katie Hill’s full remarks in her farewell speech from the floor of the US House of Representatives

“One of Hill’s congressional colleagues, Republican Rep. Duncan Hunter of California, is running for reelection despite being charged with using campaign funds to finance romantic flings with lobbyists and congressional aides.”

The Guardian- Wondering why more women don’t run for office? Look what happened to Katie Hill

The Atlantic- The Humiliation of Katie Hill Offers a Warning

“George Papadopoulos, the former Trump campaign foreign-policy aide indicted for lying to the FBI over his knowledge of Russian election interference in 2016, is now floating his candidacy in Hill’s old district.”

3 thoughts on “Katie Hill, Bodily Autonomy and the Need for Feminist Mama Bears”

Unauthorized use and/or duplication of this material without express and written permission from this site’s author and/or owner is strictly prohibited.